2008 has been going pretty well for Hitomi and I. I'm not sure if it's because I've turned into a nice(r), more thoughtful guy or Hitomi's happy, or getting old or tired of each other smooths out relationships. In any case, it's been good so far. One theory I have is I've been off enjoying my own hobbies and I've been busy with work. Or she's been grateful I've done translation work for her idol, Momoi Halko.

Valentine's Day I had considered weeks in advance. Gifts and deed ideas ranged from baking a cake to sending flowers to her work. Hitomi's not too into jewelry or flowers, which saves money. I've done cake baking before. But what has been successful before, on a number of levels, has been buying clothing, or underwear aka lingerie. She still wears Birkenstock sandals bought by her very ex-boyfriend and a watch or two. And she's kept around the few clothes I've bought her over the years and it's always a treat to see that.

Given my schedule, shopping waited until the day of. I went out cycling to a few stores in search from some undies. It was a beautiful day and I had time in the morning to shop. I was dressed like your typical bicyclist, and though I stick out like a flashing LED in a lingerie store, somehow that makes me feel more comfortable.

Construction-wise, there's a lot of variation of underwear. But the general rule seems to be, the less material the more expensive. But I try to be mindful of comfort. You hope they're worn at least a few times.

I also picked up some chocolate at Fran's which was quite busy even in the middle of the morning, full of men deciding how big of a box is reasonable. I actually haven't heard Hitomi complain her chocolate box wasn't big enough, and actually in the mind of Hitomi an enormous box would be neither cute nor conducive to maintain body weight. Selection was easy and the line moved relatively rapidly until a man who wanted to put together a customized box for his honey stalled the process. Yes, you can hand-pick 20 different chocolates and caramels but if you don't have any idea about anything, why not buy the already assembled "assortment" box?

I made it back in time for some meeting. I was going to meet Hitomi downtown and she was late and I was too. Hitomi decided on Japanese crepes for dinner. The place was closed though, it being one of those "occasional" days they close early. Still, there's nothing wrong with the alternative restaurants nearby. Then, I bring out the with gifts and find out Hitomi wasn't expecting anything, since I was busy. And thus, I got nothing in return.

The behavior/result flowchart is as follows: 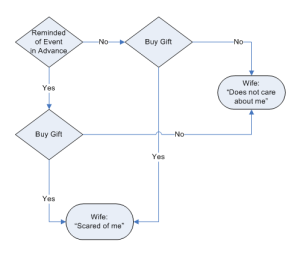 You may notice from the diagram that there are only two final states, neither of which result in a strong positive for me. Of course, Hitomi would cite several supporting arguments for why I should be reasonably scared of her.

I had nothing special going on the coming Saturday, and I wasn't going to spend my three-day holiday weekend indoors, especially with the nice weather. Thus, with a bit of assistance from my Mom, I rode about 110 miles from my house to downtown Bellingham with some of the riders from .83, whose logo is of a bottle opener and sprocket. I, being punctual, arrived early for a 6AM departure, which inevitably dragged on to 6:15AM as a few riders were having equipment issues, possibly hung over, etc.

The morning was cold and a little rainy and I was attempting the ride on my singlespeed, which had much needed fenders and lights. People were nice, but I wasn't that sociable at the stops, mainly because I wanted to get back to riding. I also wasn't dressed for the group I was in. Nobody else wore padded tights/shorts but instead had Brooks saddles and wool pants. No fancy jerseys either. They all wore mostly practical clothing that most roadies would find old fashioned. In my favor, I had a nifty, practical bicycle people were interested in talking about, and one rider like me wanted to take off from the slower group and whose name I can't quite recall, but whose bicycle I would recognize: a beat-up Gary Fisher with grip shifters and Crank Bros pedals. The ride itself was quite fun, actually most of the RSVP (ride to Vancouver, B.C.) ride I will be doing. The ugliest part of the ride was crossing I-5 from Arlington, but the rest of it was riding in the country or along bike paths. It was pretty flat, too, with some climbing before Bellingham on Chuckanut Drive. (Photo from the group.)

Before flying off to California, I'd like to mention a short ride with Kevin and Gary, and later a nice BBQ dinner put on by Stacy, Kevin's seemingly eternal girlfriend. It was a holiday for me, but Hitomi was off working. I had wanted to see her at that dinner, but she worked until about 9PM. I pretty much hadn't seen Hitomi the entire week since Valentine's Day and I was leaving the following day. And with the forecast calling for rain in S.F. and with a growing number of people I didn't want to see at my work, I wasn't keen on flying out.

Still, there were at least a few people I wanted to see and it's fun to eat out.

Kevin was out with Pat from Catdaddy for both a Game Developer's conference and a series of meetings at Take Two the following week. I earlier decided to stay the weekend to spend some time with other people. There's a lot to do and if it's wandering around town I have more fun with a couple others along.

We met at the De Young museum, which had live music and was apparently free admission. They had spent most of the day walking across town and climbing up hills. Kevin's favorite thing to do is climb hills and take pictures, and Pat made to climb these hills in dress shoes, was shuffling around pained at the museum. We left early. I took the two to my favorite Korean BBQ spot in S.F. and we made a early night of it.

Saturday at 7AM I woke up to put money in the meter; I had parked outside our hotel in Fisherman's Wharf for free that night and had to feed the meter. Then, I took Kevin to a nice Little Italy cafe and we then walked around in the morning until 9AM and the meter I found required money. I didn't want to be cheap about it, but we were waiting for Pat to active his iPhone and so instead drove around town looking from various viewpoints.

Saturday was the big S.F. Chinese New Year parade, but with high winds and rain I imagine it was canceled. Walking around, several booths' roofs seem to lift off the ground at times and people were pelted with rain. At least we had no interest in sitting in a puddle outside. Instead, we drove to Muir Woods National Park and mostly was out of the wind and rain thanks to the large trees overhead. (Incidentally, a bicycle ride to the woods looks like a lot of fun, but quite challenging. I had considered it before and I'll have to do it sometime when it's raining less.)

Sunday we drove out to Point Reyes and saw the dramatic coastal parts of Marin I had yet to see. It was a perfect time of year to see everything green, thanks to all the rain. We saw the lighthouse, unfortunately no longer operational, but still intact and open to visitors. Along the point were elephant seal colonies, which were quite fun to see; there were many pups and mothers in the various pocket beaches far below the cliffs we were on. Kevin attempted various shots of the cliffs while the light filtered through the clouds, sometimes passing bright light or blocking it, confounding him.

Blogging before the word "blog" was invented.
View all posts by eliasross →
This entry was posted in Uncategorized and tagged .83, bellingham, ride, san francisco, san rafael, underwear, valenties. Bookmark the permalink.